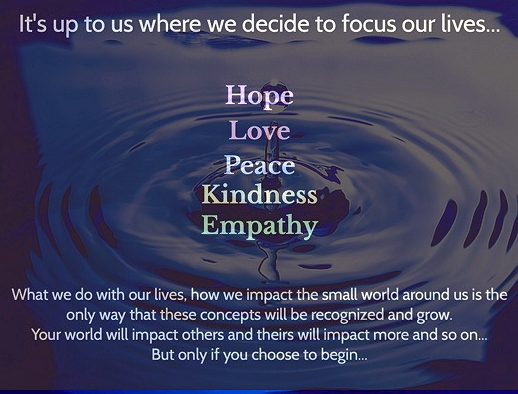 On Sunday night, the day before Martin Luther King Day, I watched my friend Barbra Niven on a Facebook Live broadcast. She was doing several things. First, she was with her daughter, her daughter’s husband and her business partner as they debuted the band Orbit Monkey’s music video called “Be The Change.” Barbara and her group were not just taking a stand against hate and discrimination. They were offering a blueprint for combatting the negative energy we all come up against, whether we’re Democrats, Republicans, men, women or children. The blueprint? Use peace, love, kindness and hope as much as you can, in whatever situation you might be in. In reality, some will be able to do more, some less.  But one of the messages I enjoyed hearing the most is… We can all do something.

While the video is, from a political point of view, clearly weighted towards the democratic side, the point of her discussion was about how to stand up against discrimination, hate, human trafficking and how to help save the planet for our children, their children and beyond. Whether you might agree with her political choice or the political choice of the song, here’s what made me so proud of her –

She was taking a stand to make a change in the world. She was standing up and saying enough!

If you are a Democrat or a Republican in the U.S., I hope you’ll view the video not so much as a political message but for the human messages it might hold for you. Listen, let’s be honest here. Some of you will hate it. Some of you will love it.

I also want to speak to those of reading this outside of the U.S.

We have people who join us here from all over the world. In cities like Toronto, London, Dublin, Amsterdam, Munich, Paris or Riyadh, you face the same challenges of combating hate and discrimination.  And this is your planet too.

Words like love, kindness, hope, inclusion must become more than just words. They must become tools we use to make “our” world a better place. We MUST allow them to become our tools! We must do our best to make ourselves better human beings. To begin, we must take the simple step of bettering ourselves by listening to others to learn, instead of finding a fault or point we can attack. We are not only making a difference for us, but for the world around us. Once that step happens, congratulations! You’ve just begun to change the world around you. Then, the small world around you begins to change the bigger world around it and the “ripple” in the pond begins and flows outward. The only way the world has ever gotten better is through one person at a time. We always think it’s a bigger challenge than we can handle. It’s not! Every big challenge is overcome through one small victory at a time.

There will always be those who disagree with what we might think. That’s fine. We can only control what we think and what we do. When it comes to others, it’s up to them how they act or what they do or say. So, do your best to influence your world with the things that matter in life – Love, Kindness, Understanding, Empathy.

My friend Barbara Niven and the band Orbit Monkey now are taking a stand in the best way they can. Again, you might not agree politically, but do you agree humanly? Do you agree with the concepts we’ve talked about here?

It’s time we move past the labels of Republican, Democrat, liberal, conservative. We need to move past separating ourselves and realize that Americans, Germans, those from Holland, Ireland, China or South Africa all have this in common…

We are all Human Beings.

The step we need to take is not to be a better Republican or Democrat. The step we must take is to be a better human being! First, it’s just a small step forward. No human being in their right mind is for hate or hurting others. No human being in the right mind wants to see others suffer. As human beings, we all truly are in this together. As human beings, we have the capability to disagree with respect, listen with an open mind and choose positive energy over negative energy. We have the capability for all these things. Whether we choose to take the steps to be a better human being is totally and completely up to us. I hope I can be a better Gregg Masters than I was five minutes ago. That’s what my friend Barbra was doing with her daughter and their group. That’s what Orbit Monkey was doing. In their own way, they were trying to make today better than yesterday, tomorrow better than today. We will each do this in our own way. Will we each find a respectful way to present our views, listen to other’s beliefs and come together as human beings? I hope across my city, my country and the world, there are others striving to do exactly this. I hope that you are one of them.